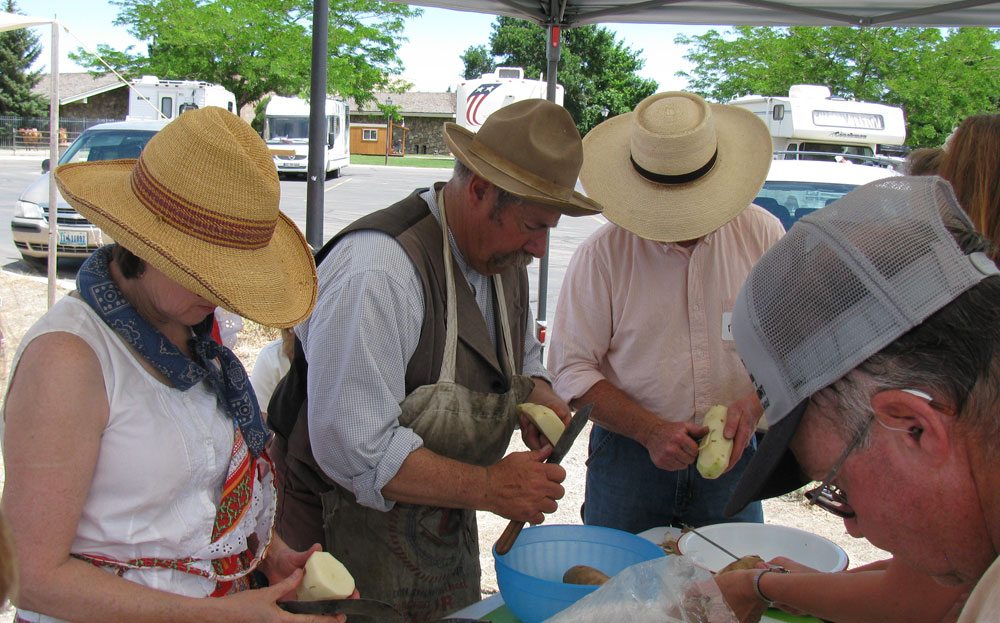 It wasn’t necessarily the trail boss who was the king of the cattle drive. More often than not, it was “Cookie,” the resident chef-of-the-trail who manned the outfit’s chuckwagon and used his trusty Dutch oven to “rustle up some grub.” The Buffalo Bill Center of the West’s well-seasoned campfire cook, Cookie Ron Reed, stokes the campfire for a Memorial Day weekend Dutch oven workshop June 29, 2013, 9 a.m. – 1 p.m. at the Center.

Participants cook a meal over an open fire using Dutch ovens and charcoal with all food and supplies provided. Those campfire cooks with their own Dutch ovens can bring them along if they prefer. The fees are $65 for members of the Center of the West, and $75 for non-members; e-mail Emily Buckles or call 307.578.4110 to register.

The Dutch oven—which originated in Holland in the seventeenth century—had a prominent place in frontier America once colonists brought them from England. Lewis and Clark carried one; mountain men strapped their ovens in their bundle of belongings; Native Americans valued the Dutch oven for its versatility and often traded furs or other valuables for the pots; and the myriad of pioneers heading west brought theirs along and considered them so special that they often willed them to the next generation.

During the long trail drives, the chuckwagon became the headquarters of every cattle outfit on the range, and the chuckwagon cook was almost royalty. Good food was key to the cowboys’ morale, and they soon learned that following Cookie’s rules made their lives a whole lot easier. They knew to ride downwind of the campfire so they didn’t get dust in the food; for the same reason, there was no scuffling allowed near the chuckwagon. Riders couldn’t tie their horses to the chuckwagon wheel or allow them to graze too close to camp, and shivering cowboys had to find another place to keep warm when mealtime fare was sizzling over the cook’s fire. Even the wagon boss walked softly around the chuckwagon cook.

Register today for the Dutch oven workshop, and learn all the finer points of cooking over an open fire and more about that chuckwagon.

Since 1917, the Buffalo Bill Center of the West has been committed to the greatness and growth of the American West, keeping western experiences alive. The Center, an affiliate of the Smithsonian Institution, weaves the varied threads of the western experience—history and myth, art and Native culture, firearms, and the nature and science of Yellowstone—into the rich panorama that is the American West.

For additional information, visit centerofthewest.org or the Center’s page on Facebook.