Home > Staff > It’s July 4th, and the colonists are searching for their flintlocks

It’s the Fourth of July! Happy Independence Day! It’s a beautiful day here in Cody—perfect for the parade this morning and for cookouts this evening. I caught sight of my old state-wide marching band go by, and I cheered my guts out. It’s the nation’s 242nd birthday today and I hope all of you are celebrating it the best you possibly can. Today we commemorate the signing of the document that canonized our independence from a parliament that committed crimes against the colonists in the name of the King of England. If you have a minute, give the declaration a read. 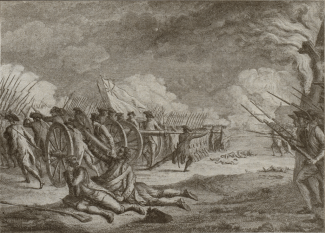 An engraving depicting the April 19, 1775 Battle of Lexington.

But of course, the Declaration of Independence didn’t end the Revolutionary War. It didn’t even start it. That honor officially goes to the battles of Lexington and Concord. Significantly to us at the Cody Firearms Museum, the British army fought those battles because they wanted to capture the arms stores in Concord, remove the colonists’ means to fight them, and stop the war before it started. Needless to say, that didn’t work out.

Even though they managed to retain Concord, the colonial militias struggled against a significant arms shortage for the entire war. Back in the 1754 Seven Years War (French and Indian War), regiments formed from colonists received guns that the British army considered obsolete. Many former American regiment men kept the muskets they received. They joined a number of personal fowlers among the colonial militias at the outset of the Revolutionary War.

Various colonies had tried to stockpile guns years before the war. The Massachusetts Bay colony first ordered arms for public use in 1748. But in 1774, those guns were confiscated by the British Army as Boston grew increasingly rowdy. Once war began in 1775 the Massachusetts militia found itself scrounging among the locals for any muskets they could buy from them.

Committees of safety in every colony contracted local gunsmiths to produce for colonial militias. Almost invariably, they ordered the same gun based on British land pattern muskets with which the colonists had been familiar since the Seven Years War. In New York, the colonial militia simply showed gunsmiths the land pattern muskets they already owned and asked for copies. Here we begin to see the first attempts to standardize firearms within the continental army.

The shortage persisted through 1776, through 1778, through the whole war. Starting in 1778, the colonial militia received shipments of military supplies and arms from France and Spain. This was thanks in large part to shrewd negotiation by Benjamin Franklin and his cohort. They knew they needed to reduce the musket shortage back in the colonies and did all in their power to secure more firearms. As France crept towards bankruptcy in its quest to hurt Britain in whatever way possible, their shipments to the colonists helped to phase out guns in dire need of repair.

We all know how this story ends. We won, huzzah! But since the shortage of arms remained constant the whole war, the colonial army needed to think slyly to overcome it. The British army was the best open-field force in the world at the time. The continental army never had the force of firepower or the training to take it on head to head. When it tried, it often didn’t end well.

For now, I’ll leave that thread hanging. I’ll get back to it in a future post. For today, let’s celebrate the colonists’ eventual success, and their determination to arm themselves and overcome a desperate odds! Cheers, and happy fourth!

The main source used for this brief post was: