Mid-way through the interview for this internship, I was asked about my favorite firearm. I answered that if I had to choose, I’d settle on muzzle-loading flintlock muskets. Even now, having worked here for more than a month and increased my knowledge about firearms—from percussion cap to cartridge systems—I still maintain a fascination with flintlocks. Why? As I elaborated during that interview, flintlocks defined military history for almost two hundred years. More than that however, my interest lies in their role in the founding conflict of the United States.

The British Playbook for Battle

Flintlock mechanisms replaced the matchlock system on arquebuses around 1550. After that, the flintlock musket remained largely unchanged for more than two hundred years. By the eighteenth century, volley fire became the military order of the day, proving consistently effective for armies in Europe. The smooth bores of the muskets didn’t reward careful aiming. They had limited accuracy and the wall of smoke produced by a line of firing muskets completely obscured the view of the battlefield. Precision fire necessarily fell by the wayside, replaced by the drive to reload and fire the single-shot guns as quickly as possible.

In Europe, most everyone fought using the same line tactics and most battles took place in relatively clear areas. The disciplined British Army fared well. But battles in the wildernesses of North America brought a challenge. The first major North American campaign for the British military came during the 1756–1763 Seven Years (French and Indian) War. Intent on striking into French Canada from the beginning, the army prepared to fight in the wild north.

The wilderness upended the rules governing European warfare. In a territory where enemies could hide and take cover behind rocks, trees, and the landscape itself, numbers provided no guarantees for victory. Instead, accuracy took on new importance. A new training regimen instilled this martial value into soldiers headed to Canada. By adopting the same forest-fighting tactics facing them, the British claimed victory in Canada.

Training (or not) for the Revolution

Fast forward to the American Revolution, and we see the British using open field lines and volleys once again. Did they forget the lessons of the Seven Years War? Well, sort of.

Between the Seven Years and American Revolutionary wars, the British army went back to fighting battles on the European continent and back to linear tactics. The army also served as a police force in many parts of the empire, adept at quickly ending difficult situations. On both stages their military prowess was evident. Come 1775, British commanders expected to do the same for Boston. Neither they nor Parliament expected a long conflict or saw any reason to change their usually sufficient tactics.

A rifled fowler of the kind used by some colonists in their daily lives.

On the other side, colonial militias lacked formal military field training. They trained infrequently, gathering on the local green a few times a year. In peacetime, these drill practices lacked discipline and seriousness, almost serving as more of a social event. Militia members tended to use their firearms in the same way they had their whole lives. Veterans of the Seven Years War carried on in that forest fighting style, but younger men thought of firearms as practical tools of daily life for hunting fowl or game. Some owned rifled muskets, which traded reload speed for improved accuracy. These rewarded the careful hunter. Others used long fowling pieces and switched from ball to shot depending on the circumstance. Colonial users of all kinds of long arms focused on accuracy. Drills on the town green did little to change that.

A standard fowler that could be used for hunting animals large and small.

Minutemen units trained more seriously, but mostly to practice quick response. Their training enabled them to deploy quickly and raise the alarm across the whole countryside in a crisis. Now we call their tactics guerilla warfare, though they wouldn’t be codified and expanded into the modern definition for another 150 years. The minutemen trained to execute traps and ambushes. They avoided getting caught and crushed in a traditional battle at all costs.

The early stages of the war pitted the minutemen’s ability to mobilize numerous far-flung militia units to continuously harass a larger force against the British army’s straightforward show of force. Thanks to careful planning and guerilla tactics, the battles of Lexington and Concord undermined the British force’s strength and were essential to the colonists’ early success. The colonial militia stopped the British column at Concord, where it had hoped to retake a stockpile of arms and supplies, and forced it to turn back for Charlestown. 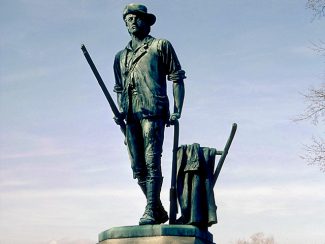 “The Concord Minute Man of 1775.” Standing in Concord, this statue commemorates the minutemen units that mobilized New England militias to the battle of Concord. –Courtesy Wikimedia

By this time militias from neighboring colonies had arrived. The British found themselves significantly outnumbered. As the British force fled down the road, each new militia unit took up a position in the woods and hills alongside. More companies arrived and kept pressure on the British the whole way. Almost continuous fire from the woods caused considerable casualties (including some officers) among the red-coated ranks. The Americans remained easily out of harm’s way, and could disappear into the forest if threatened. They could strike, withdraw, and strike again later.

These tactics naturally emerged from colonists’ experiences with firearms as daily tools. Militiamen hid out of sight behind rocks and trees, where they could reload in safety. Their longarms had until that day put food on their tables, and they shot them as if hunting; slow and measured aim through the forest guaranteed deadlier results from each fired musket ball.

After several hellish hours on the receiving end, the column made it back to Lexington, where reinforcements and Earl Percy’s cannons provided safety. The battle ended, but the militias and minutemen had proven colonial resistance was not an upstart rabble to be easily put down. It could hold its own and had to be taken seriously.

The Americans’ ability to mobilize quickly and utilize the environment to their advantage carried them through this first encounter. But guerilla war could only carry them so far. With open war on the horizon, colonial forces needed to reform their methods and transform from militia to army. To pull off this shift, they would have to simultaneously change the way they thought of firearms.

Savas, Theodore and David Dameron. A Guide to the Battles of the American Revolution. New York, New York: Savas Beatie, 2010.