When Bierstadt’s painting The Last of the Buffalo was displayed in Paris in 1889, his urgent message about the looming extinction of American bison was amplified to an international audience. Bierstadt’s painting, on view at the Paris Salon, was at the center of artistic, cultural, and political discourse about the American West on a global […]

William Jacob Hays, a friend of Bierstadt’s, was awestruck by the bison herds along the Missouri, and wrote, “On my way down the river I saw thousands of buffalo; they covered the bluff and prairie as far as we could see.” But on his journey west in 1860, Hays also recognized ominous warning signals for […]

Bierstadt: Decimation of the Herds

Bierstadt used art as a platform to denounce the decimation of America’s most iconic and largest mammal. Some of his paintings present the bison as flourishing and others lament the species’ tragic disappearance. From Minnesota to Louisiana, the whole country was one vast buffalo range. One could fill a volume with the records of pioneers […] 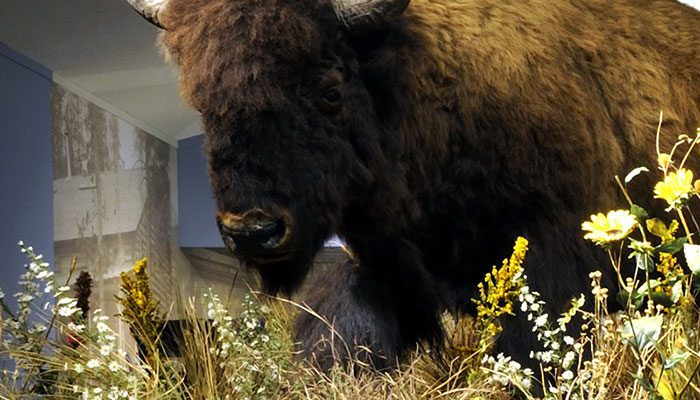 Treasures from Our West: American bison

Originally featured in Points West magazine in Spring 2012 American bison There is no more fitting icon to represent the Spirit of the American West or the Buffalo Bill Center of the West than the American bison, more commonly known as the American buffalo. Nearing extinction even in its western homeland by the early twentieth […]

Originally featured in Points West magazine in Winter 2009 The American bison (Bison bison), also known as buffalo, once ranged throughout the American West and across the Mississippi River into the eastern wood-lands. It is an icon of the American West, representing both the West’s failures and suc-cesses. The bison is a survivor—shaped by its […]