Museum curators often receive public inquiries, and sometimes an outside person can be very helpful to gaining better insight on a painting or object in the museum. For Karen McWhorter, the curator of the Whitney Western Art Museum, a call from a professor made her look at George Catlin’s “Mandan-View of the Missouri Above the […]

Points West Online: On the heels of Lewis and Clark

Originally published in Points West magazine Summer 2009 On the heels of Lewis and Clark: Charles Fritz follows the inspiring visions of western artist-explorers By Christine C. Brindza Former Curatorial Assistant, Whitney Western Art Museum The work we are now doing is, I trust, done for posterity, in such a way that they need not […]

When George Catlin traveled up the Missouri River into present-day Montana, he admired the Native American peoples of the Great Plains and observed the bison herds as one of their critical resources. Fearing that the looming decimation of bison would devastate the livelihoods of Native peoples, Catlin proposed the creation of a “nation’s park” in […]

Treasures from Our West: “Dear Mr. Catlin…I Love You” by Paul Dyck

Originally published in Points West in Fall 2010 Paul Dyck pays tribute to his idol, George Catlin, one of the first to document the Plains Indians in art. In this work from 1964, Dyck incorporates original images by Catlin using Flemish and Asian painting techniques. An artist in the early-to-mid nineteenth century, Catlin traveled West […] 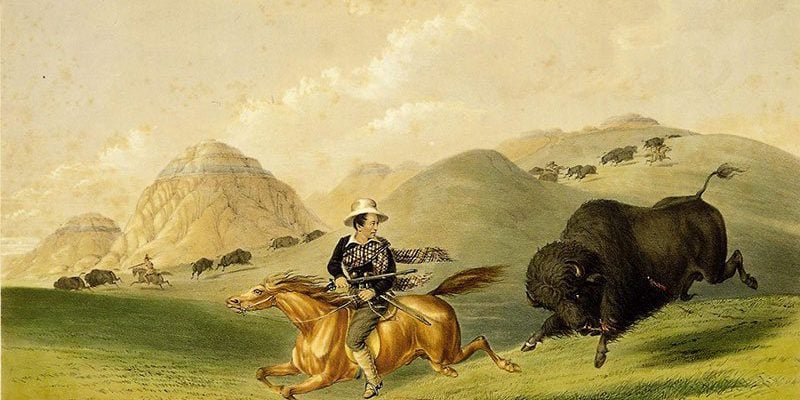 From Points West magazine Originally published in Fall 2000 Catlin Showed Us By Edith Jacobson Former Intern, Whitney Western Art Museum By the 1830s America was beginning what is now known as “The Era of Westward Expansion.” What did those first settlers know about the West? What did they expect? At that time, the American frontier was the […]