Collection Connections with the Corps of Discovery – Points West Online

Originally published in Points West magazineSummer 2009 Collection Connections with the Corps of Discovery By Christine C. Brindza In 1804, President Thomas Jefferson chose Meriwether Lewis and his friend, William Clark, to lead the Corps of Discovery to explore the lands of the Louisiana Purchase. Lewis and Clark’s overall mission was to find and map […]

Turning Back: Reflecting on the Art of Harry Jackson – Points West Online

Originally published in Points West magazineSummer 2014 Turning Back: Reflecting on the Art of Harry Jackson By Mindy N. Besaw Harry Jackson (1924–2011) is a familiar name around Cody, Wyoming. He is known primarily for paintings and bronzes about the American West, but also for his larger-than-life personality. He was, in fact, the most influential […]

Originally published in Points West magazineFall 2006 Harry Jackson’s Sacajawea By Marguerite HouseMedia Coordinator/Editor, Points West Literally every day, I pass Harry Jackson’s monumental sculpture Sacajawea as it stands proudly in the Cashman Greever Gardens of the Buffalo Bill Center of the West. Until my interview with the artist, little did I know Harry originally […]

Honoring Our Veterans Through Art

One of the Whitney’s most popular representations of a cavalry soldier is Harry Jackson’s The Flagbearer. As a veteran of World War II, Harry Jackson experienced first hand the stirring events of war. His sculpture of a soldier astride his galloping horse, the American flag flying above his head, is a timeless image symbolic of […] 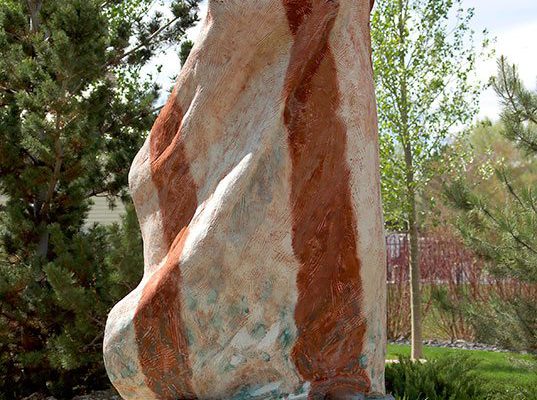 Sacajawea By Harry Jackson 1980 Location: Cashman Greever Garden This bronze portrays Sacagawea, the famed Shoshone woman who safely led Lewis and Clark across the Rocky Mountain wilderness during their trek to the Pacific Ocean from 1804 to 1806. Artist Harry Jackson created this sculpture as a tribute to courage, hoping it would be “as […]