Buffalo Bill’s Wild West show was so famous by the end of the 19th century it traveled to Europe. These shows were celebrated back in America by billboard-sized posters. These posters are rare to find. This was the time when posters were plastered on walls, then the next show would come in and […] 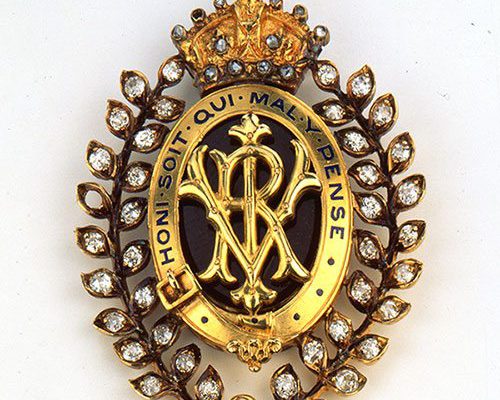 Treasures from Our West: Pendant given by Queen Victoria to Buffalo Bill

Originally featured in Points West magazine in Winter 2009 Pendant given to William F. “Buffalo Bill” Cody by Queen Victoria Queen Victoria gave this pendant, or watch fob, to William F. “Buffalo Bill” Cody while his Wild West performed in England. Made of gold and surrounded by diamonds, the words, “HONI∙SOIT∙QUI∙MAL∙Y∙PENSE” translate roughly, “Evil to […]

Originally published in Summer 2014 Points West By Mike Parker When the Buffalo Bill Center of the West acquired a poster commemorating an 1888 performance of Buffalo Bill’s Wild West show for Queen Victoria of England, it created quite a stir. It’s impressive to see the 32-panel, 10 x 28 ft. poster on display in […]