Originally published in Points West magazine in Spring 2008 T.D. Kelsey: Realist, Romantic, and Inspired Sculptor By Mindy A. Besaw Former Curator, Whitney Western Art Museum Cody, Wyoming, was one of Sidni Kelsey’s favorite places in the world. It is appropriate, then, that the Buffalo Bill Center of the West received the Sidni A. Kelsey […]

A strong show with extraordinary artists—now, the 2016 Buffalo Bill Art Show & Sale sees immediate benefit from new incentives for participating artists. Additional prize money and a new category focused on sculpture prompted an increase in the number of applications from nationally recognized artists. Still limited to 106 applicants, the caliber of artist and […]

Texas Gold By T.D. Kelsey 1982 Location: South side of building, at the back Sculptor T.D. Kelsey, a cowboy turned artist, sculpted this bronze work with a cowboy and seven Texas Longhorn steers. Each bull represents a different “family” of Texas Longhorn. On his own ranch, Kelsey raises longhorn cattle and horses, and is often […] 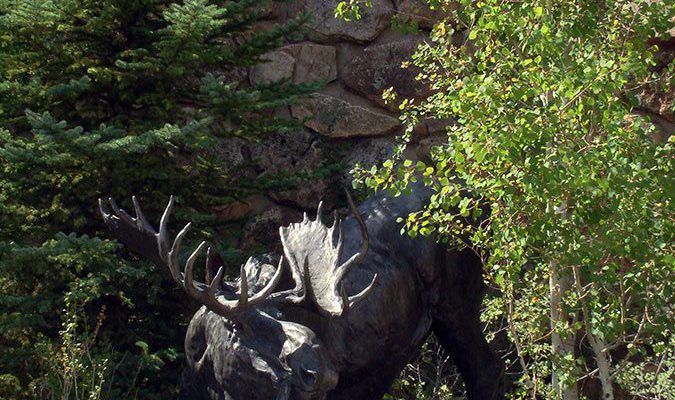 Swamp Donkey By T.D. Kelsey 1996 Location: Tucked into the Cashman Greever Garden, visible from the Breezeway going to the Plains Indian Museum In this sculpture, T.D. Kelsey rendered a larger than life Shiras bull moose, raising his head after feeding on the bottom of a lake or pond. Water is running off his antlers […]

Royal Challenge By T.D. Kelsey 1991 Location: South side of the building, toward the back Sculptor T.D. Kelsey captures the tension of head-to-head competition for dominance between two male elk in this bronze. His love of animals came from his life in the West. Now, he is passionate about all wildlife and wildlife conservation throughout […]

Daddy Long Legs By T.D. Kelsey 1995 Location: Front of building, toward street T.D. Kelsey relies on observation and first-hand experience for accuracy in his work, and bestows personality to each of his sculptures with creative and whimsical titles. In this sculpture, Daddy Long Legs, he captures the animated and sometimes awkward movements of an […]