During World War I, while John Browning was working on a heavy machine gun that would use a .50 caliber cartridge, Cody Firearms Museum Assistant Curator Danny Michael said Winchester got the Army contract to create that cartridge. “So as they were developing this, they obviously needed a gun to use as a testbed to […]

When men went off to fight on the front lines in World War I, many factories and companies replaced their workforce with women and young boys.  But the Winchester Repeating Arms Company started employing women as managers even before the war. That’s according to Samantha Harper, the archivist at the McCracken Research Library.  “They were […]

During World War I, some Winchester Repeating Arms Company employees were eventually exempt from the draft because their skills were essential to the war effort. “There were a couple of gentlemen that worked for Winchester that actually designed weapons or ran machinery that were so difficult to run that they were deemed as being essential […] 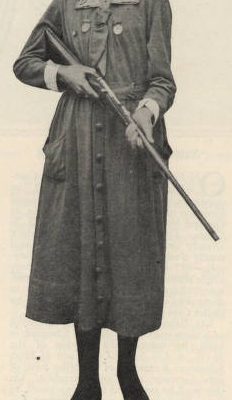 APRIL 6, 1917: UNITED STATES ENTERS WORLD WAR I In Plains Indian culture, military endeavors for men were considered one of the most honorable deeds. War achievements such as “counting coup” granted men certain rites within his society. The act of counting coup required tasks such as capturing an enemy horse; touching the first enemy […]

Treasures from Our West: World War I Luger

Originally featured in Points West magazine in Fall 2011 World War I Luger A vintage firearm that is left in its original condition is typically considered more collectible and valuable than one that has been refurbished or modified. There are, however, some firearms restoration specialists who are so skilled and artistic that they can create […]