Home > Staff > Stumbling Upon History in the Records Office

One of the exciting things about working with factory records is what you come across. So far my work in the Cody Firearms Records Office has been to organize the Winchester Model 21 records. As I mentioned in my previous blog post, I was able to find many orders that were sent to Abercrombie & Fitch. It’s interesting to see what stores purchased orders of the Winchester Model 21. This past week, I have stumbled across a couple of names that caught my attention and decided to explore them further. I was really curious about names like Von Lengerke & Antoine and Kerr’s. 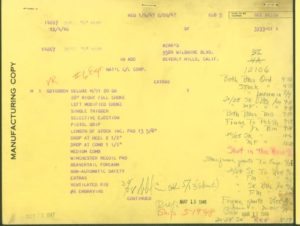 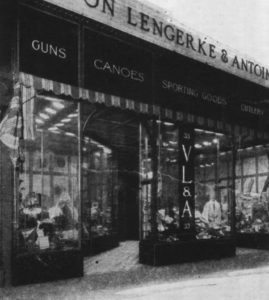 Von Lengerke & Antoine became very famous for their reputation of their customers, those customers being members of the Capone gangs in Chicago. The company seemed to get much attention because the firearms were traced back to them and connected them with Al Capone. The company was known for selling Thompson submachine guns, which were very popular in gangs during that time period in Chicago. One newspaper source from the Daily Illini stated that the “von Lengerke and Antoine company occupied much police attention in 1929”. The guns were traced back to Von Lengerke & Antoine employees and there after ended up in the wrong hands such as ex-convicts.

It is stories like these that make looking at the Model 21 records so interesting. I never knew these companies existed but now I know some of their history.

If you ever need services from the Cody Firearms Records Office go to their website here or give them a call at 307-578-4031.

Rebecca Hoback is from Nashville, Tennessee. She is a recent graduate from the University of Tennessee at Chattanooga, where she earned a bachelor’s degree in History. She is currently a Cody Firearms Museum Intern, as well as a Firearms Records Intern. Her interest is in Civil War history and the history of the American West. She plans to obtain her master’s degree in History with a concentration in Public History, and pursue a career as a curator.