On the Plains, the feat of counting coup on enemies was an achievement that allowed warriors to gain different levels of prestige and status through acts of bravery. Counting coup could be done by touching (or, more likely) striking an enemy with a coup stick, club, bow, or hand; touching an enemy’s defensive structure; or stealing an enemy’s weapons or his horses tied up in camp.

Counting coup often was humiliation enough on those touched—warriors who practiced this often did not proceed to kill the enemy, if the rout was on and the coup strikers did not want to waste precious ammunition. Jesuit missionary Fr. Pierre-Jean De Smet camped with the Oglala Lakota in 1848 and was told of a defeat in battle by the Crow tribe. After ten Oglalas were killed, the Oglala leader Red Fish detailed how the remaining men were chased for “a distance [and] the Crows then were content merely to repeatedly count coup on their enemy with clubs and sticks,” signifying that the defeated Oglala were not worth the time and resources needed for the Crows to kill them (McGinnis).

If a warrior returned from counting coup unscathed, he would receive an eagle feather. If he returned wounded, that feather would be marked with red pigment. Returning unscathed earned a warrior higher honors. Just as ledger art and winter counts were used to record events and milestones by Plains Indians, warriors carved notches into coup sticks denoting successful coups, and the feathers they earned from previous successful coups were tied onto the sticks. Coup sticks could be thin and straight or hefty and curved at one end, resembling a shepherd’s crook.

The late Dr. Joseph Medicine Crow served with honor in World War II. This segment, from the 2007 PBS documentary The War, explains Medicine Crow’s background and how his actions in Germany led to him taking the title of Crow war chief: he touched an enemy without killing him (counting coup), he took an enemy’s weapon, he stole an enemy’s horse, and he led a successful war party. When the Crow elders asked about his war deeds upon his return home,  he recounted them and they responded that he was a war chief.

END_OF_DOCUMENT_TOKEN_TO_BE_REPLACED 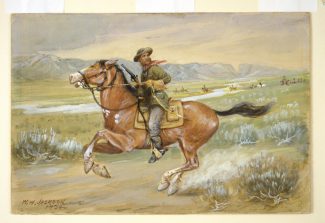