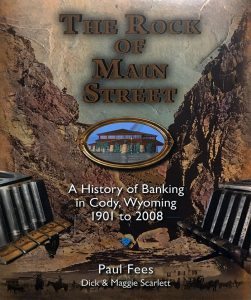 The Rock of Main Street

“Few businesses in early twentieth-century America relied more on banks than Buffalo Bill,” Fees and Scarlett write. “He saw himself as a developer, a capitalist, and he invested in products and projects from Minnesota to Arizona. In his role as Wild West show impresario, he generated tremendous cash flow. But like a farmer’s earnings, his show business income was seasonal. Banks…advanced him the capital each year that enabled him to take his show on the road…Yet, he was one of that public…who knew little about banks. He took their role in his financial life for granted.

“Of all the great institutions that serve the people, such as schools and colleges, churches, railroads, the post office, newspapers and banks,” the authors continue, “the public knows least about banks.”

A Wyoming native, Scarlett has spent his life in banking. In 1981, the Scarletts purchased the Jackson State Bank, which became one of the regional leaders in the banking industry. Currently, Scarlett, the former president and CEO of United Bancorporation for Wyoming Inc., is the managing partner of Scarlett Capital LLC. He is a long-time board member of numerous civic, banking, and business organizations including the University of Wyoming and the Center of the West. Previously, Scarlett published Sagebrush to Silver Dollars: the History of the Jackson State Bank.

Known as one of the leading experts on William F. “Buffalo Bill” Cody, Fees is the former curator of the Center’s Buffalo Bill Museum, 1981–2001. He earned a bachelor degree in history from Stanford University, and his MA and PhD in American Civilization from Brown University. A sought-after lecturer and consultant, he writes and speaks about the American experience, especially in the West.