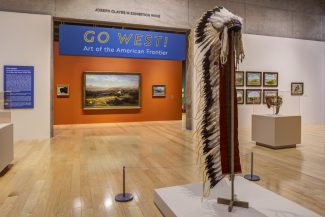 Myths and legends of the American West still resonate today even though the region’s so-called “frontier” era was proclaimed closed long ago. In a sense, the period of great exploration and settlement in the West by newcomers continues to define aspects of the American spirit.

Or really, what it means to be American, said James D’Arc, former Curator of the Brigham Young University Motion Picture Archive.

“One of the great ideas that’s also inherently American about manifest destiny [is] there’s a horizon, go to the horizon and go as far as you can,” said D’Arc. “In the 1870s, 1880s and 1890s that became mixed with the Horatio Alger Myth of upward mobility, working hard, and the sky’s the limit. So, it has very much to do with this Yankee spirit of tightening up your boot straps, getting a little extra energy, working a little longer during the day and you can become anyone and become anything.”

And this is what the Buffalo Bill Center of the West exemplifies. The museum is located in a town named after the man who has been said to have brought the West to the world: William F. “Buffalo Bill” Cody. In fact, much of the myths and allure of the American West were promulgated by Buffalo Bill’s Wild West, which traveled all around the United States and Europe. His shows were entertainment for the masses before the advent of motion pictures. But that typical image you have of the American Western drama: cowboys and Indians, the attack of the Deadwood Stagecoach, the Pony Express, sharpshooting, and Custer’s Last stand are borrowed from themes popularized by Buffalo Bill’s Wild West.

“Buffalo Bill’s Wild West was in every way a precursor of what Americans responded positively to and how they wanted to interpret the American West, especially as we got into the 20th century and there was very little left of what people romanticized about the American West,” said D’Arc.

Inspiring discovery of the American West is a central tenant of the Center. So how does the museum tell these stories beyond its’ walls?

As most museums do, the Center lends its’ artwork to other institutions and coordinates traveling exhibitions. Back in 2013, the museum collaborated with the High Museum in Atlanta, Georgia, on an exhibition about cultural contact and exchange in the West during the nineteenth and early twentieth centuries. It was such a success that since then a similar show has been sent to Omaha, Nebraska, Palm Springs, California and now in its last stop, Salt Lake City, Utah.

Go West! Art of the American Frontier grapples with the myths and the legends of the American West through some 85 works of artwork created by both Euro-American and Plains Indian artists. Karen McWhorter, the Scarlett Curator of Western American Art for the Buffalo Bill Center of the West, said the story starts with the first artist-explorers who joined government survey parties. 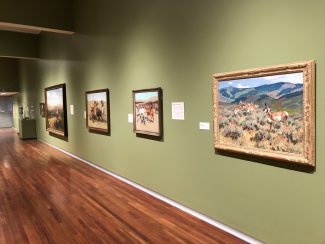 “The goals of these artists were multifold, but some hoped to document the Indigenous cultures in this region. Others hoped to provide perspective [on] the wildlife and the landscape, all of which was essentially “new material” for eastern audiences,” said McWhorter.

The show spans the work of those earliest artist-explorers and spans all the way to the early decades of the twentieth century, when artists began to look with increasing nostalgia toward a West “that was,” the so-called “Old West.”

But another story inspired by this exhibition is how it connects with the communities where it is shown. Currently Go West! is at its last location. And from the opening in December to the closing in March, the exhibition hasn’t been a static installation. Rather it has been activated by multiple events and lectures where audiences can get a better understanding of how their region was involved in and impacted by the exploration and settlement of the West by Euro-Americans. 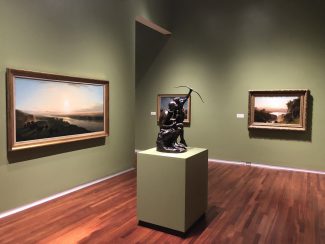 “The city-wide programming that has been developed is really unusual, for us at least, and allows two cities that are like-minded and have such passionate residents to come together to think about the West in a very interdisciplinary fashion and to engage our visitors through a number of different ways,” said Leslie Anderson, the curator of the Utah Museum of Fine Arts of European and American Regional Arts.

Through free academic lectures, film screenings, and special events like the Utah Symphony’s production of High Noon, the exhibition’s wide-ranging program makes an effort to hone in on pertinent themes and ideas which will resonate with the community where it is shown. 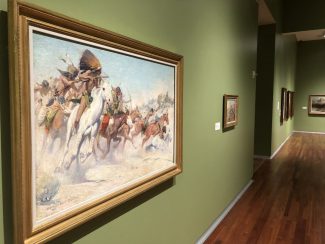 As Go West! enjoys its last moments, it does so by celebrating the spirit of the American West in Utah, a region which doesn’t hold as tightly to the iconic images of the Wild West as promoted by Buffalo Bill, said Donna Poulton who holds a Ph.D. in Art History and teaches at Brigham Young University.

“Brigham Young [Mormon leader] was very adamant, early on, that the people who came to Utah not be ranchers or miners. They should be farmers,” said Poulton. “If you look at the art of Utah, it’s all about farming. You’ll always see barns, haystacks and  fields. You’ll never see cowboys in the paintings from Utah early on. It’s all about settlement. It’s all about community.”

Artists came through this area because of the railroad. Artists who were traveling to Yellowstone National Park or other parts of the West had to travel through Salt Lake City.

“While they would be waiting here, they would tour around and sketch incredible paintings,” said Poulton. “Bierstadt did an incredible study of guys out in the great Salt Lake and then he would go out to Montana and do the grand paintings. So, we never really get the grand paintings because they were here [Salt Lake City] just to do studies. But it’s our luck that they came here and in the service of the railroad.”

Academic lectures discussing the connections between horology (the study and measurement of time), the railroad, and the American West; the roles of Utah pioneers in the West’s early chapters; and the importance of the American West today, are some among the unique experiences offered to the Salt Lake City community in conjunction of the exhibit.

The Go West! exhibition shares the spirit of the American West beyond Wyoming.

“[It is] part of our [the Center of the West’s] mission, in fact, to share the spirit of the West,” said McWhorter. “There really is nothing like standing in front of a fabulous painting or sculpture or object and we realize and recognize that Northwest Wyoming is a difficult place to get to, so many of our would-be enthusiasts can’t make it here, and we want to share our collections outwardly to increase our reach,  to share the spirit more broadly, and also just to celebrate what we have here.”

The Center has some of the most iconic paintings of the American West by artists including Alfred Jacob Miller, Frederic Remington and Charles Russell. Poulton said Utah doesn’t have any collections that are comparable.

“So, if you take these artworks outside of Wyoming, there’s an allure. A continued allure to the American West to see the real paintings in real life. I think it really resonates with people and that’s the importance,” said Poulton.

By collaborating with institutions where the exhibition is located, the Center has managed to share the American West spirit around the nation.

“I, also, turn to the Center because of its expertise,” said Brad Westwood, the Utah State Historic Preservation Officer.  “And I think of its mission. I truly feel that Utah has a lot to learn from Cody on how we can make our history much more accessible.”

Many aspects of an older, wilder American West are not as visible today across the region, so it is important to keep the spirit of the historical West alive.

“For younger generations, the value of keeping the Western myth alive is so they recognize what a dominant theme it’s been for most of the generations preceding them. It helped form ideals in the 20th and 21st century,” said D’Arc.

Go West! will close its doors in March, as the artworks need some time to rest but this five-year stint will not be the last of the like. The success of the exhibition within these communities sparks new multi-disciplinary efforts to keep the spirit of the American West alive.

Kamila Kudelska is the multimedia journalist for the Center and for Wyoming Public Media. She tells the hidden stories of all five museums. And reports on the news of northwest Wyoming. Kamila has worked as a public radio reporter in California, Poland and New York. She enjoys skiing (both downhill and crosscountry) and loves to read.