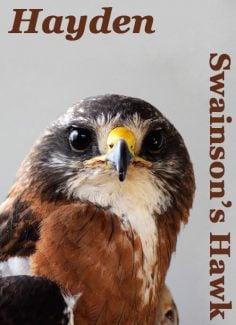 Hatch year: Unknown
Came to us from: Wilson, Wyoming

Hayden is an adult, male Swainson’s hawk. He was hit by a car in Idaho and taken to Teton Raptor Center near Jackson Hole, Wyoming, for treatment. Radiographs showed that not only did he have a broken coracoid (similar to our collar bone) and pelvis, but he also had metal fragments in his intestines. A blood test revealed he did have some lead poisoning from the fragments which most likely caused weakness, which in turn led to him being hit by a vehicle.

When Hayden began exercising in preparation for release, it was discovered that he cannot lift his tail (possibly due to nerve damage from the pelvis fracture). Because of this disability, he cannot fly properly and must be cared for by people for the rest of his life.