Kirsten Belisle is from Roscoe, Illinois, and she is currently pursuing a master’s degree in Museum Studies at Western Illinois University-Quad Cities. As an intern for the Cody Firearms Museum, Kirsten will create educational programming in the gallery space and assist with a visitor studies campaign within the museum. She has many interests in the history field, but a few include paleography (the study of old writing), US railroad history, and the role firearms played in developing leisure culture.

How to Arm a Space Cowboy, Firefly Edition

When it came to arming the characters of the Firefly series and its movie Serenity, one gun would not do. Heck, even two guns were not enough for men like […]

Burglars, Space Cowboys, and a Question about Firearms

Our office door is always open for visitors to come in, introduce themselves, and ask us questions. It just so happens that a visitor’s question inspired this week’s blog post. Last […] 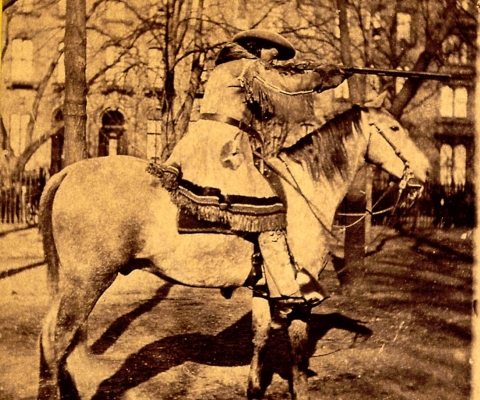 A Legend Remade: Ithaca Tries its Hand at the Hawken

Legends contain lessons, and humans are nostalgic beings. We like to look back at the past and pat ourselves on the backs for jobs well done, plans well made, and […]

Mythical Ithaca: Discovering a Story in the Records

One of the best feelings in the world comes from looking at a collection of records before anyone else. To give a brief overview, this gun company started in 1883 […]

Setting the Records Straight: A Glimpse into the Archives

Do you keep a journal? A secret diary? A to-do list on a post-it note? I know the idea of writing with paper and pen seems foreign in today’s technologically […]

You know that feeling you get when you’re inching your way to the top of a roller-coaster? The one where excitement and fear are warring in your chest and you’re trying […]