In 1937, a celebratory event called “Columbus Day” was enacted as a federal holiday, presumably to commemorate the discovery of America by Christopher Columbus. Discovery is a loaded word in terms of Christopher Columbus’ place in history. Let’s look at this carefully and give thought to the myth that most of us were taught (and […]

History is not made simply by passages of entry and exit into this world. History is an accumulation of one’s life experiences and interplay of all types of beings―humans, animals and otherwise―along with elements of the natural world and forces that we cannot control. Sunday April 3, 2016 & marked the passage of Joe Medicine Crow, […]

Seven students from St. Labre Indian School in Ashland, Montana―Donovan Wind, Victor Yarlott, Summer Tapelo, Bernadine Fisher, Trinity Rides The Bear, Preston Brady, and Justin Lyons―studied beadwork and learned essential museum practices by going through all the steps needed to exhibit the items in this case. Their experience is part of a collaborative program between […] 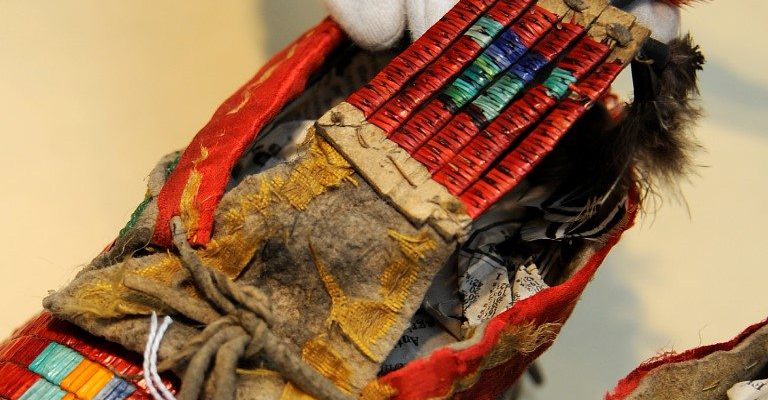 So you’ve got an Indian object…

The Plains Indian Museum of the Buffalo Bill Center of the West receives countless inquiries each year about items in personal collections. Our visitors, whether virtual or not, are an inquiring bunch with many treasures and great questions. Some of this interest in historical items may come from the popularity of Antiques Road Show, a […]

Our visitors ask great questions, and we strive to provide answers to some of the items that people find most intriguing or perplexing. Each week we will feature a FAQ (Frequently Asked Question) to the Plains Indian Museum, and a response for visitors who want to know more! Keep those questions coming… Q: How did […]