I know what you’re thinking. “Gasp! This isn’t Monday already is it?! I need to go do Monday things!” Well don’t panic. It’s still Sunday. I decided to post a day early so I can feel better about posting again on Thursday. Since Thursday’s my last day I figured I should deliver a sign off post or something (keep your tissues at hand for that one). For today, however, I’ll just give you an update on each of the birds. 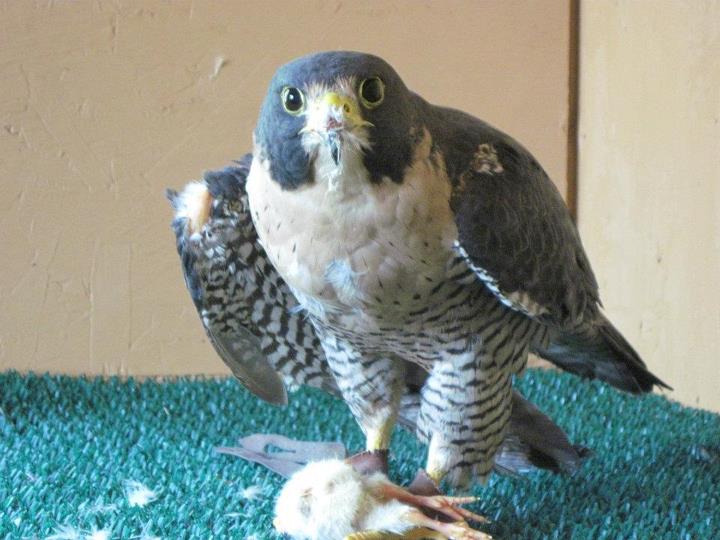 Sometimes she actually bothers to pluck the feathers first.

First is Isham, our red-tailed hawk, and Haya, our peregrine falcon. I put them together because they’ve been pretty much the same. Isham still delights in pooping on a carpet whenever I hold him, probably as revenge for all those times I pulled loose feathers off of him. His mew still looks like a red tail exploded in there. He’s still the best-behaved bird of all time. Haya is still perpetually starving, which makes her evening eating contest hilarious. She’s been regularly defeating her child opponents.

This afternoon we made a minor feeding mistake that caused me to have to do something I’ve never dared to do before; take food away from Hayabusa. I approached cautiously while she was distracted by one of her chicks. As soon as I grabbed another chick, she lunged foot first to grab it back from me. I offered her the half chick she was originally supposed to get as a trade. She took it, then stood over her food and glared at me until I went away. 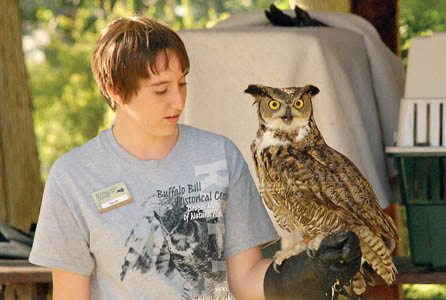 This one’s from a library program. The local robins were being mean to him.

Teasdale, our great horned owl, has been in a much better mood since the weather started cooling off a little bit. He still delights in pulling out his jesses and in hissing me hello every morning. Recently, I found his happy place. There’s an area off stage near the amphitheater where we wait with the birds. Right next to it is a large pine tree. A couple of days ago there were a ton of people out in the garden with us, and Teasdale was feeling a bit uncomfortable. That’s when I noticed a break in the branches of the pine that would allow me to easily duck under the tree with Teas in tow. Initially this weird movement annoyed him, and the area under the tree was strange to him. Then, suddenly, Patrick (awesome volunteer) walked right past us without seeing us. That’s when Teasdale realized that he had finally been rendered invisible, just like he’s always wanted. He was finally content.

Suli, our turkey vulture, has been doing a great job flying with only one minor mishap that wasn’t even her fault. During a flight from myself to Melissa, the line snagged on my badge and simultaneously jerked Suli off course and yanked the line out of my hand. The result was several audience members getting a VERY close look at her flying over their heads to land behind them. Now the badge stays in the mews during shows. While Suli will fly to me, if she has to, she still prefers a game of chase to letting me pick her up. The end result is usually me having to haul her out of her house, bating all the way. Today she finally figured out that the house was not a safe place, and resorted to running around her mew like a maniac until I finally grabbed a jess.

The free programs are still a big success. While visitor numbers are going down, our donations are still holding relatively steady. So far we are doing a great job of earning enough money to support ourselves without having to charge. Big thanks to all who have donated so far, all of our volunteers and staff, and to all of the birds for being their magnificent selves. 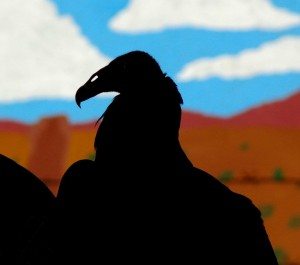 A silhouette of Suli, the turkey vulture

Layman’s Terms: Leather straps that, when pulled, will keep the falcon from biting you while her beak is being trimmed. However, until they are pulled you must try to grab them while the now blinded by the hood peregrine searches for your fingers with her still open beak. Good luck.

Dr. Charles Preston is Senior Curator at the Center of the West and Founding Curator-in Charge of its Draper Natural History Museum and Greater Yellowstone Raptor Experience.