The Best of Mack Frost

Bob Richard welcomes Mack, who shares his own best photos

Join us for the first event in this year’s “Local Lore with Bob Richard” series of free talks hosted by our McCracken Research Library. The free presentation takes place at noon on January 20, in the Center’s Coe Auditorium.

This time, Bob welcomes and introduces fellow photographer, cousin, and lifelong friend Mack Frost, who shares a selection of his own best photographs. Stunning scenery, sunrises and sunsets, lunar eclipses, and the many moods of Heart Mountain among other things are some of Mack’s favorite subjects, which he captures with beautiful composition and dramatic lighting.

Both Bob and Mack will take questions following the presentation.

The talks in this series are gathered in this YouTube playlist. A video of Mack’s talk will be uploaded to the list shortly after the presentation.

The Local Lore with Bob Richard series continues throughout 2022, with most programs taking place the third Thursday of each month (in May and June the talks will be the second Thursday). We will post details of those programs as we receive them. 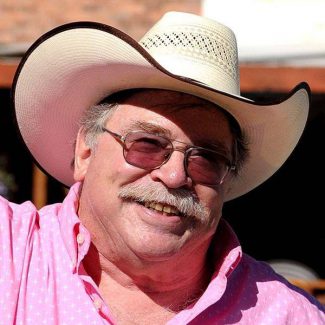 A descendent of Park County pioneer Ned Frost, a friend of Buffalo Bill, Mack Frost was born and raised in Cody, Wyoming. He and Bob Richard are cousins, and their family ties are through their grandmothers, who were sisters and married the two business partners Ned Frost and Fred Richard, noted hunting guides, outfitters and dude ranchers.

Mack’s ties to the Buffalo Bill Center of the West also go way back, and Mack remembers visiting the Center as a child through his family’s long-time membership. His uncle Dick Frost was the second curator of the Buffalo Bill Museum.

Mack graduated from Montana State University with a degree in film and television. A noted photographer in his own right, Frost often exhibits his work in several galleries and conducts workshops on the subject. He exhibits his work at—and serves on the board of—Open Range Images in downtown Cody, and his photos can also be seen in the murals at Yellowstone Regional Airport.

Mack currently serves as the Center’s digital technician, scanning a multitude of historic photographs—including those of and about his forebears.

With a wealth of knowledge about the Cody and Yellowstone National Park areas, Bob has a lifetime of stories to share with future generations.