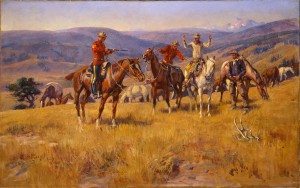 When Law Dulls the Edge of Chance by Charles M. Russell

The Royal Canadian Mounted Police held a special place in Charles M. Russell’s heart. Their colorful exploits and heroic deeds made them a likely subject for some of his paintings. While in Alberta in 1888, Russell first encountered the “Red Coats” and was quite impressed by their presence. After seeing them again in 1912 in Calgary, the artist was inspired to paint them. When Law Dulls the Edge of Chance was the last of a series of four paintings about this subject. The theme: The Mounties always get their man.