Our Cody Firearms Museum is NOW OPEN after its full renovation!

Ashley Hlebinsky, the Robert W. Woodruff Curator of the Cody Firearms Museum at the Center of the West, shares her knowledge about firearms, the Firearms Museum’s collection, and the history of firearms. Here, find links to media such as videos and blogs that Ashley has done. 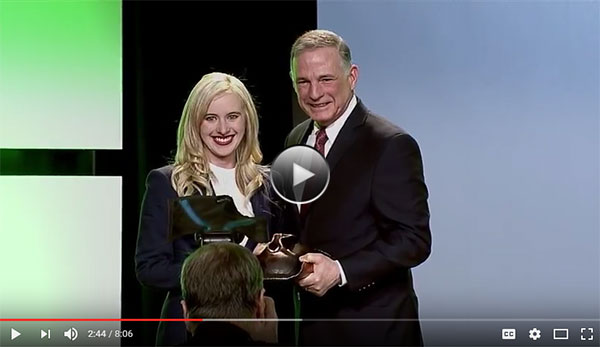 This prestigious honor recognizes extraordinary achievements in communications in the areas of responsible firearms use, the shooting sports, and hunting. Ashley received the award on January 17 at the SHOT Show® (Shooting, Hunting, and Outdoor Trade Show) State of the Industry Dinner in Las Vegas. See the ceremony in the video at right:

Read the news release about Ashley winning the award.

Ashley Hlebinsky, a Pittsburgh native, has brought her energy and love of firearms to Wyoming as the first female curator at the Cody Firearms Museum. Click here to read.

The Gun Vault #9: Pocket Pistols: Derringers and “Deringers”
First posted July 27, 2016: A rare and unique “Deringer” pocket pistol and shares some history around the once popular derringer pistols.

The Gun Vault #7: Audie Murphy’s Colt Bisley
First posted May 12, 2016: Some history surrounding a Colt Bisley revolver once owned by one of the most decorated American combat soldiers of World War II, Audie Murphy.

The Gun Vault #5: Cross Dominance Shotgun
First posted March 10, 2016: A unique Collath shotgun that was custom fit more than 100 years ago to a shooter suffering from crossed-eye dominance.

The Gun Vault #3: 500+ Year Old Firearm, Matchlocks, Flintlocks, and More
First posted January 5, 2016: The oldest firearm on display at the museum—a more than 500 year-old repeating hand cannon. Also, on display are classic examples of some of the earliest ignition systems developed, such as the matchlock, wheel-lock, flintlock and a percussion pistol.

Video: 5 Things You Might Not Know About Winchester (Outdoor Life)

Video: 5 Things You Might Not Know About GLOCK (Outdoor Life)

Video: John Martz Luger
Most of the time, finishing a firearm detracts from its original historic value. But a few experts have actually improved models after working on them.

Video: Apache Revolver
A curious firearm that incorporates brass knuckles, a foldable dagger, and a pepperbox all in the same model. (1988.8.2819)

Post: The 28 Most Notable Guns from Remington’s 200-year History
Celebrating 200 years of an iconic American company.

Video: King Louis XV Blunderbuss
This embellished blunderbuss was a gift from Catherine the Great of Russia to King Louis XV of France. (Smithsonian loan)

Video: Armalite AR-17 Shotgun
Although the name AR-17 might call to mind a black gun, this 1960s-shotgun is a different breed than the AR-15s and AR-10s.

Post: 13 of the Biggest Gun Fails in Recent Firearm History
A lot of weird guns have been made throughout the ages. Some were the product of innovative thinking that didn’t exactly pan out.

Post: Getting the Christmas Goose with a Goose Rifle and Cutaway Suppressor
Check out this unique goose hunting rifle—a Winchester Model 1903 Semi-Automatic Rifle in .22 caliber that has been modified. (1996.15.1)

Post: Wesson & Leavitt Belt Revolver
You may not recognize the name Massachusetts Arms Co., but you likely recognize the players—Smith, Wesson, Stevens, and Ames. (1988.8.2480)

Post: William Harnett and the Faithful Colt, 1890
This firearm is not a real gun at all…or is it? An auction catalog from 1893 depicting it read: “A genuine old Gettysburg relic…”

Post: Winchester Model 1894 Lever Action Rifle
Remington used firearms as props for his artwork as well as in real life. Here’s one of several firearms in our collection that belonged to him. (1.67.335)

Post: Herb Parsons’s Winchester Model 71 Lever Action Rifle
To make movie magic, all it takes is a wizard. In the 1950 Universal International film Winchester ’73, all they needed was the “Wizard with a Winchester” known as Herb. (2003.15.16)

Post: Lincoln-Head Hammer Gun
Yes, that is a President Abraham Lincoln’s portrait bust in place of a traditional hammer. (1988.8.1241)

Post: American Trap Gun
Nothing says property and home defense quite like this 19th century American Trap, or Alarm, Gun. This was a popular type of firearm in the South in the mid-1800s, used to protect property, oftentimes found on tobacco plantations. (1988.8.3209)

Post: Browning Brother’s Single Shot Rifle Patent Model
John Moses Browning (1855–1926) is regarded as one of the greatest—if not the greatest—firearms designers in history. (1988.8.313)

Post: Feltman Pneumatic Machine Gun
Is it a bird? Is it a plane? Is it a Tommy Gun? A very obvious “no” to the first two, but the third requires a second glance. It is actually an air gun made in Coney Island in the mid-twentieth century. (1993.8.26)

Post: Winchester Wetmore-Wood Revolver
You may be thinking, Winchesters didn’t make revolvers. But Winchester did, and the revolvers were actually quite innovative. (1988.8.998)

Post: Webley-Fosbery Automatic Revolver
A semi-automatic revolver? I promise I am not committing an egregious terminology faux pas. In 1895, a recoil-operated, automatic revolver was invented. (1988.8.2486)

Post: DuBiel Modern Classic Rifle
In the 1970s this company created a new invention that went on to revolutionize centerfire bolt action technology in rifles.

Post: Tom Tobin’s Colt Model 1878 ‘Frontier’ Revolver
So many have heard of mountain men like Jeremiah Liver-Eating Johnson or Grizzly Adams, but I love finding more obscure mountain men and giving them their 15 minutes of fame. (2003.10.1)

Post: Walch 10-Shot Double Hammers Pocket Revolver
Most people associate the year 1860 and the New Haven Repeating Arms Company with the Henry Rifle. But check out this lesser-known and quite peculiar little gun manufactured in the same year by the same company.

Post: Winchester Model 1887, Serial No. 1
Serial number 1 is awesome enough—but I then read this sentence on the label: “Purchased by Henry Ford and presented to Harvey Firestone.” (1984.2.1)

Post: Deringer vs. Derringer
While some manufacturers became creative with their copycat guns, some intentionally misspelled their firearms as “derringers.”

Video: From the FN Booth at the 2016 NRA meetings in Louisville, Kentucky. Guests include FN’s Mark Hanish, Team Springfield shooters Jalise & Justine Williams, and Rob Leatham, and Ashley Hlebinsky of the Cody Firearms Museum. (May 29, 2016)

Video: Remembering Tom Knapp
First aired February 7, 2014: Ashley Hlebinsky takes a look at the life of Tom Knapp and discusses recent recent acquisitions that are firearms he used during his time with CZ USA.

Video: History of Guns in America (Women’s Outdoor News, The WON)
First aired June 18, 2016: Ashley Hlebinsky shared the evolution of firearms, as well as a peek into her studies regarding the perception of firearms. Disclaimer: Ashley Hlebinsky and or the Cody Firearms Museum are in no way endorsing or condemning the #GunVote campaign by taking part in teaching us the history of firearms in this video.

15 Posts: The Truth About Guns: Interesting firearms at the Cody Firearms Museum.